As the super creative title of this post implies, I’ve recently renovated my bathroom. Well, technically speaking I’ve started some renovations on the small bathroom on the main floor of my beat up old house. Hopefully it will be finished this week. Originally I thought I’d bust out this update in a week but like so many things in life renovations never follow the schedule we think they should. 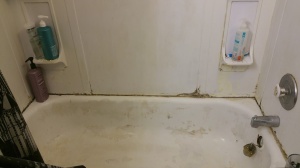 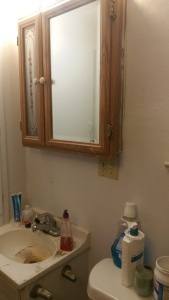 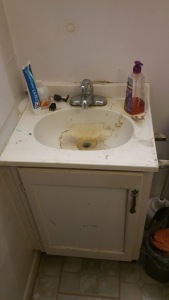 I’ve been wanting to do something to that hot mess for a while but didn’t even know where to start. The peal and stick laminate tiles gave me the push I needed when they started breaking and pealing off revealing the wood sub floor beneath. Now that’s a classy look right there! 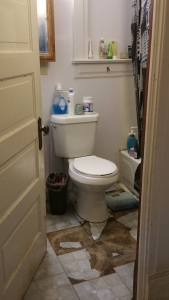 One of my sisters had just tiled her bathroom wall which meant I had someone with first hand experience to tell me about the process. Between her and about a million YouTube videos on tiling a bathroom floor I had enough confidence to tackle tiling the floor. On top of that my sister had enough tiles left over from her wall to cover my floor.

So two Monday mornings back I found myself wandering around one of those big box hardware stores (you know, with the orange or blue signs) trying to convince myself that I am an Adult and I can handle this. There may have been a couple mantras being repeated as I wandered back and forth before finding the flooring supply aisle way at the back of the store.

Two cement backer boards and a 50lb bag of mortar later I was pushing an awkward cartful of goods out to my minivan.

The toilet came out easily enough but the vanity put up a struggle.

The hot and cold valves were on the inside of the vanity and they were not fitting through those holes. My goal in this project was to do as little plumbing as possible. Taking the ends off these things did not mesh with that goal. Good thing I had bought a reciprocating saw (aka a Sawzall except that’s not the brand I got)! After some rough hacking the cabinet was free and it was onto scraping off the lingering floor tiles.

And here’s what I found underneath. It’s really not as bad as it looks…other than that one corner. I’m not sure what happened there. 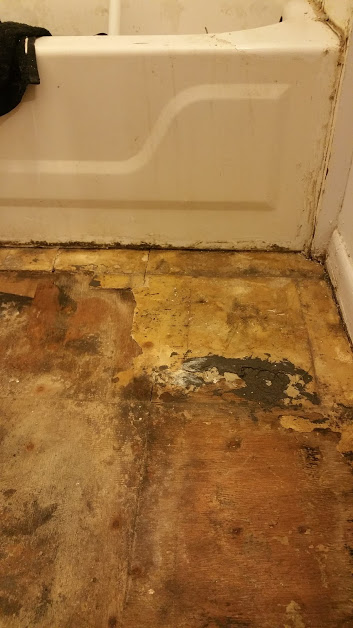 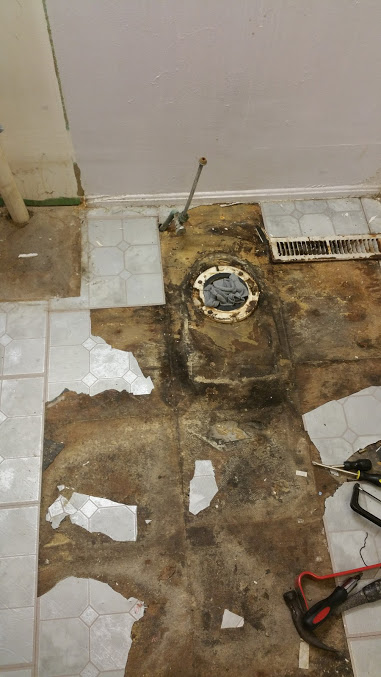 It looks pretty rough and for a few minutes I thought I was going to have to do some leveling but after buying a larger level I discovered that this little patch of roughness was technically even. Booyah!

(That black ring from the toilet is a little ominous but I’m mostly sure it’s a result of the broken flange there.)

And then it was on to prepping for the tile.

While I’m still not done, great strides have been made. Next time I’ll show you the finished tiling and maybe the painting too! Fun stuff all around.

A metamorphosis in progress...always.
View all posts by nights7 →