This past weekend went from packed to zero in a disorientingly rapid fashion thanks to covid 19 and social distancing. It’s been very strange but I’m grateful that Michigan’s governor has been aggressive in preemptively closing schools, cancelling gatherings, and strongly encouraging social distancing.

The schedule clearing actually started Wednesday morning, a quarter of my class was supposed to attend an interprofessional education session at Oakland University with second year medical students but with the first two cases of Covid 19 confirmed in Michigan, one from my school’s county and the other in OU’s, that event was cancelled….fifteen minutes before it was supposed to start. Soon my youngest son’s regional spelling bee scheduled for Friday was cancelled followed closely by the Pi Day run we had signed up for and then the youngest’s last basketball game. By Thursday evening all the K-12 schools in Michigan were closed for the next three weeks and the outlook for this week had shifted dramatically. My spring break is this week anyway, now I get to enjoy a little more down time with the kids over break.

Still, though, I was at a bit of a loss over how to fill all the new found time. And somewhat disappointed about the cancelled Pi Run. I love Pi Day and have been waiting for years for it to fall on a weekend so we could do a good and proper Pi themed race. Clearly some Pi day Pies were in order…to ease the disappointment and fill the time. 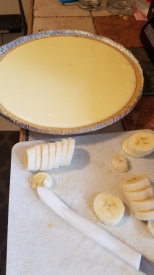 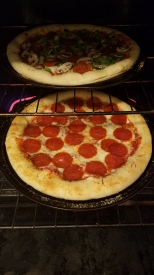 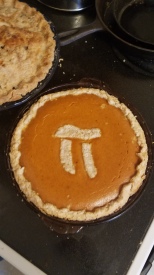 You may not be aware of this but pies are one of my favorite things to bake. I enjoy the challenge of making a good, flaky golden pie crust from scratch and there are so many possible types and combinations of crusts, styles, and fillings. Pies are truly an art form, one I’ve practiced at for years…this round of pies, though, was more learning experience than art.

First there was the banana cream pie, my daughter had her wisdom teeth extracted on Wednesday afternoon and still wasn’t eating full on solid foods by Saturday. We had two slightly past ripe bananas and she likes the cheap and easy pudding mix banana cream pie. No big deal right? wrong! Enter the apocalypse: Friday night the local stores were all out of milk. Cleaned right out. We had half a gallon but with four kids in the house that does not go very far. I did have a couple cartons of coconut mix in the cupboards and a quick Google search told me I could substitute coconut milk for regular milk in pudding mix. Great! I mixed it the pudding mix and coconut milk, folded in some whipped cream, poured it over sliced bananas in a premade graham cracker crust, and put it in the fridge to set. Except it didn’t set. Apparently I should have read a little further on my search, instant pudding mix does not thicken when made with coconut milk and hours later the filling was still liquid. I poured the liquid off the sliced bananas and mixed in some more cool whip. Another while later there was still no signs of setting so into the freezer it went and we had frozen banana pie. 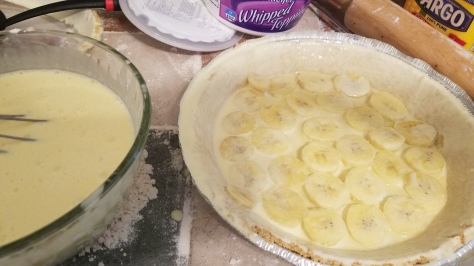 The next pie on my list was a classic apple pie. It’s one I’ve made (relatively) often for years and it usually turns out awesome. The crust is a very simple recipe of flour, salt, water and shortening but I like to use half coconut oil and half shortening. I didn’t realize I was out of shortening until I was making the crust so I just used coconut oil this time. As I was mixing the water in and wrapping the crusts to refrigerate I noticed they were a little dry but I didn’t think much of it; a flaky crust dances the too dry line anyway. 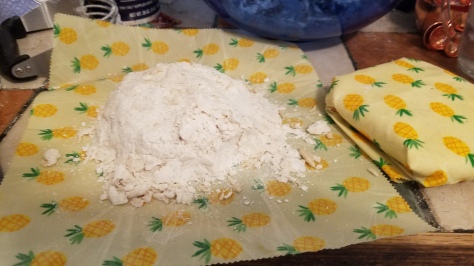 When I took it out of the fridge a while later and started to roll I realized this one landed on the dry side of that line. 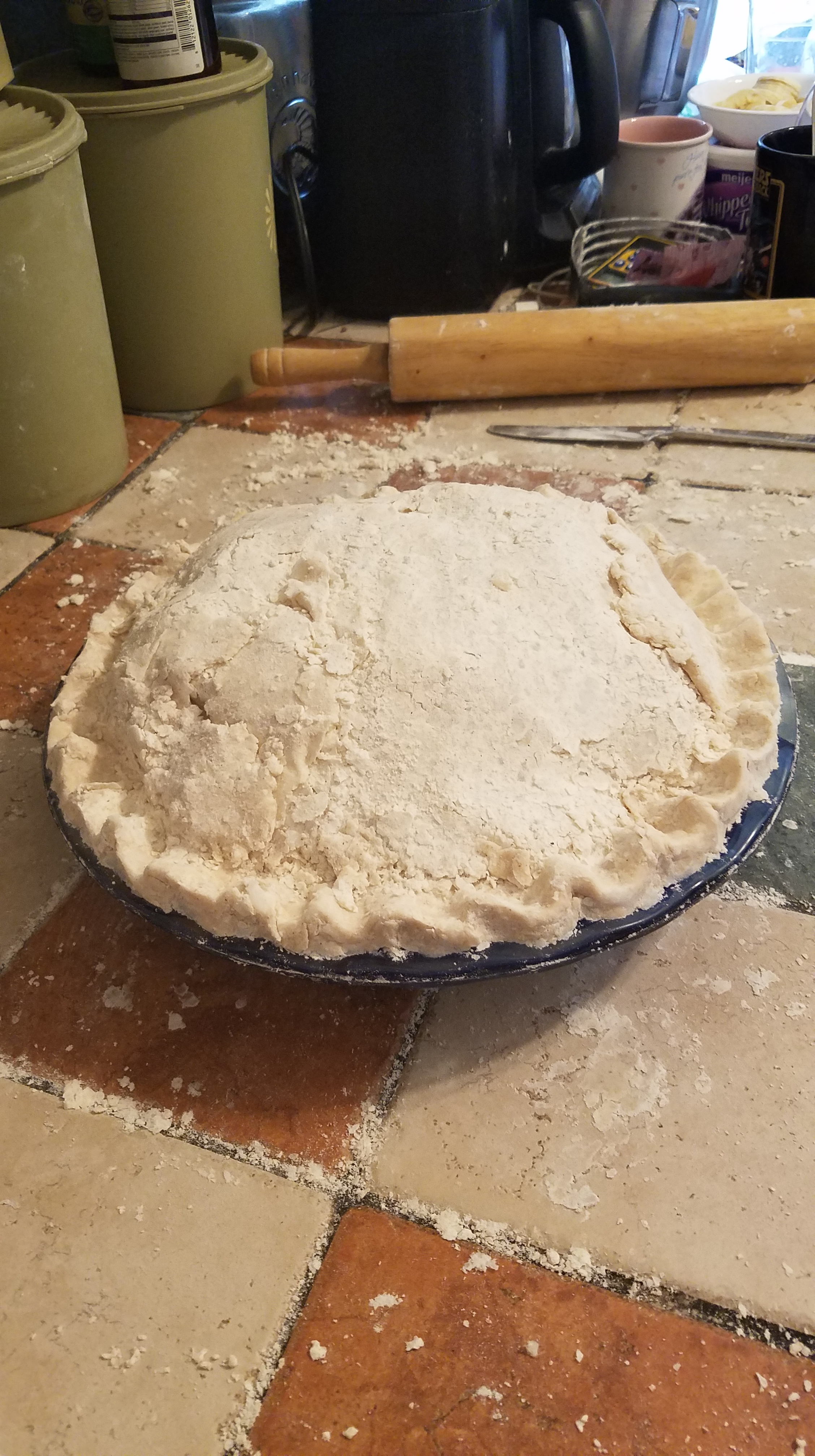 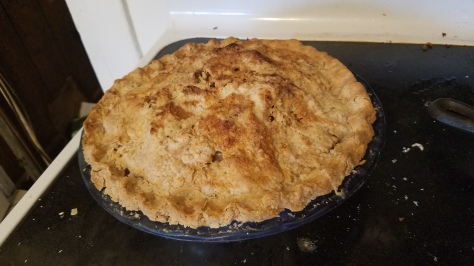 Lastly, I decided to make a pumpkin pie. Three pies may seem excessive but with everyone home and loitering about it really is not. (In fact, there’s maybe two pieces left now and it’s only Monday.) My 19 year old son made the crust for this one, he noticed that it looked a little dry and had the foresight to add more liquid. 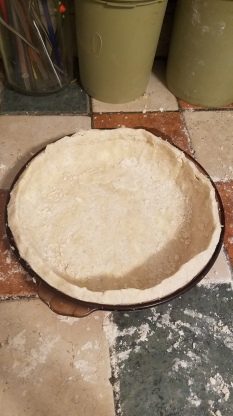 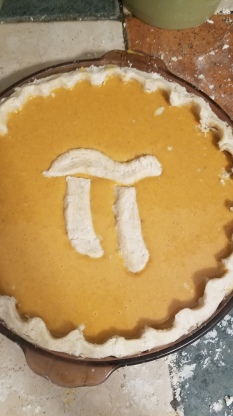 It came out perfectly.

Despite the foibles of these pies they made for a delicious Stay at home Pi Day celebration. 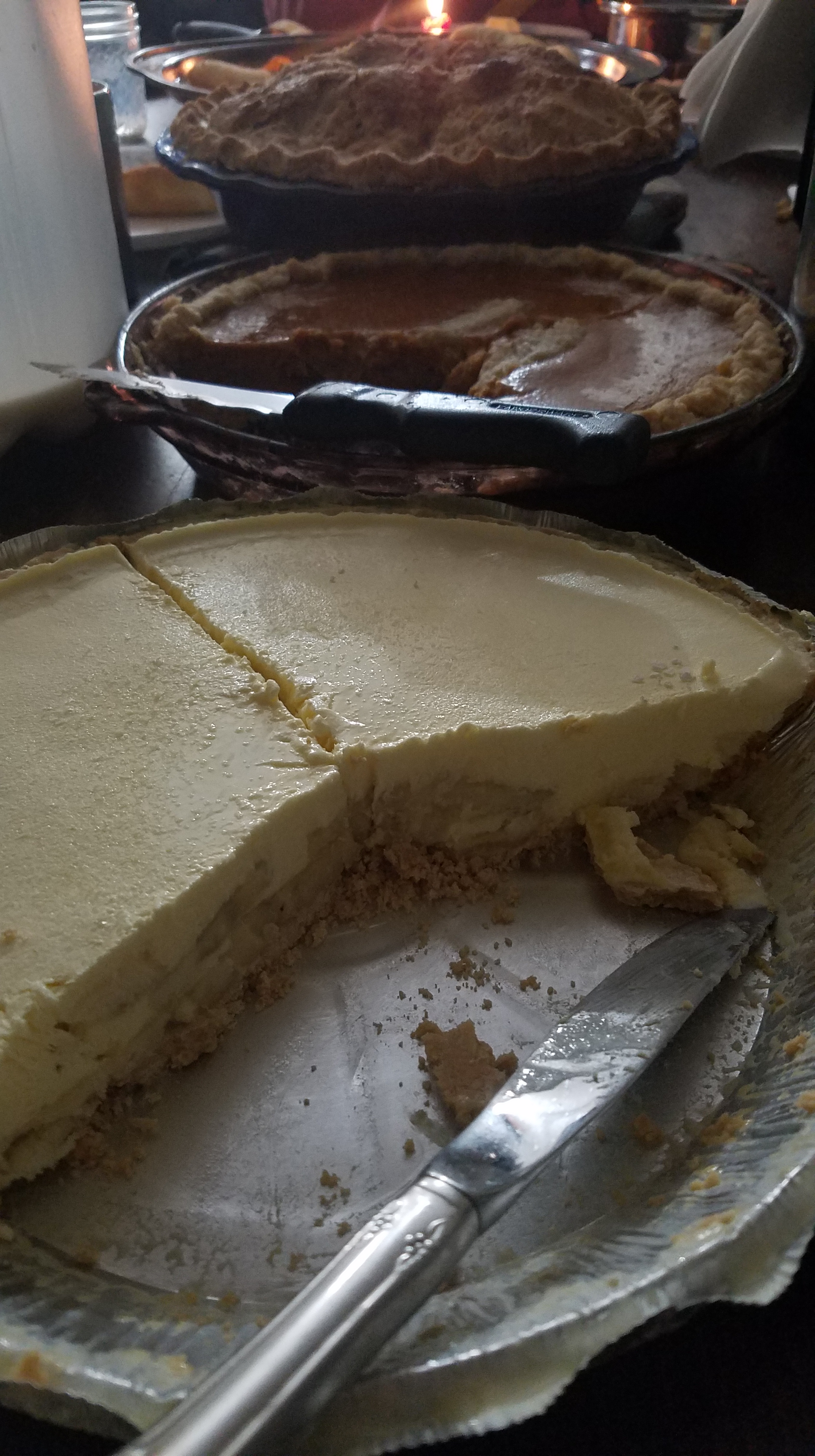 Because avoidance is my go-to coping mechanism when life is getting crazy (which of course just makes it even more insane), I keep thinking about ways to prepare for the start of the school year, or as I’ve taken to calling it, the Oncoming Storm, but I haven’t actually done anything yet. My daughter did convince me to take her to the nearby outlet mall last week for some new school clothes but all the other things, school supplies, much needed socks and underwear, pre-prepped freezer meals, groceries beyond microwavable foods and ice cream…those are all still in the theoretical stage. I did, however, make some pies. Because that’ll be super helpful when we’re getting home from school and practices at seven o’clock when everyone is tired, hungry, and stressed out from being awake, functional, and around people all day. (In our household of six, only one of us is an extrovert.)

Come to think of it, a stock pile of pies on my freezer might be useful after all.

First there was strawberry rhubarb… 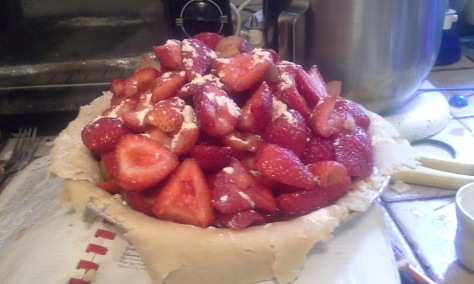 ..which got eaten within the week. Then there was summer fruit, blueberry, and a bastardization of the two… 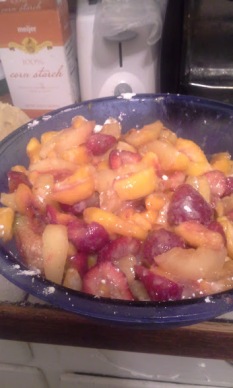 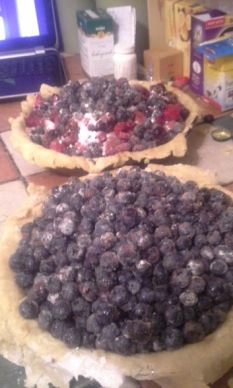 I got the fruit ingredients for a summer fruit pie (peaches, nectarines, plums, strawberries, and cherries) and blueberries early in the week but didn’t get around to making these pies until the fruit was on the brink of going bad. When I’m looking ahead at the week it always looks like it’ll be relaxed and there will be time for some baking and making but something happens, time gets all wibbly-wobbly, and suddenly it’s Thursday and I’ve barely maintained for the week. And before you know it, BAM!, it’s September.

So there I was Wednesday night with fruit that was getting mushy and a week that was running out (my weeks end on Thursday, not Saturday or Sunday like most people’s). The only thing to do was mass produce. This was going to be a three pie night.

I used my favorite pie crust recipe. It’s basic, only flour, salt, shortening, and very cold water, but always turns out good. It helps that it’s a lot less dry than many crust recipes and that lends itself to easier rolling and shaping especially when using the wax paper roll out method. (okay, I just made that name up but it does describe the process pretty well).

After mixing the dough and pressing it into a ball (and separating it into two if you’re doing double crust pie), wrap the ball in wax paper and press it down into a disk that’s roughly an inch thick. No need to be precise though. Stack your disks in the refrigerator for however long the recipe says to (in this case twenty minutes or so…again, we’re not being precise here).  If they’re super stiff afterwards, let the wrapped disks of dough sit at room temperature for a few minutes before rolling them. Gradually roll each disk of dough between two sheets of wax paper until it’s nice and thin and big enough to cover the bottom and sides of the pie pan with some overhang. 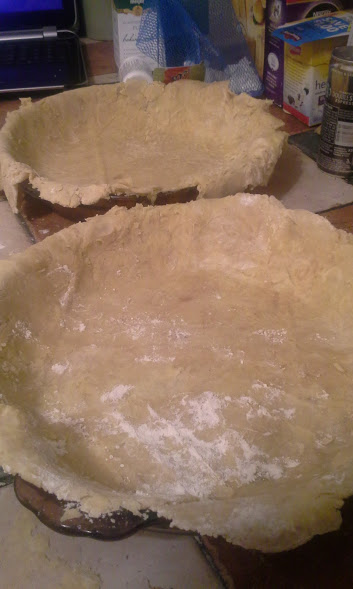 Once the crusts are all rolled out you just remove one layer of wax paper and flip the crust into the pie pan. This eliminates some of the breaking dough and frustration of trying to keep your crust in tact while putting the pie together. After the shells are filled, roll the top crust out the same way and place it on top. Pinch the excess dough from both bottom and top crusts together in whatever pattern or shape you want, cut a few slits in the top,and you have a pie. Or three. 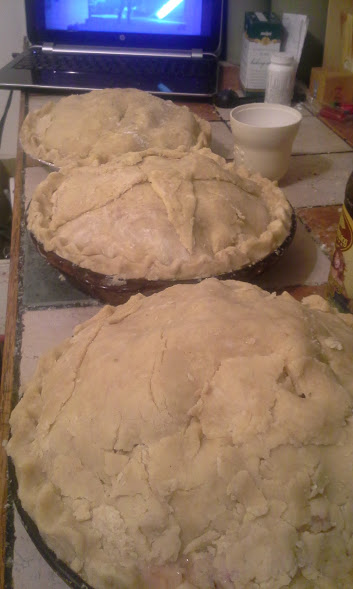 I used the dough that was trimmed from all the edges to give this pie a sun/star type thing. Yeah, it’s a little messy but by that time it was two int he morning and I was rocking a two-beer buzz while making pies and watching Orphan Black. (I’m pretty sure that right there is  adulting done right!) 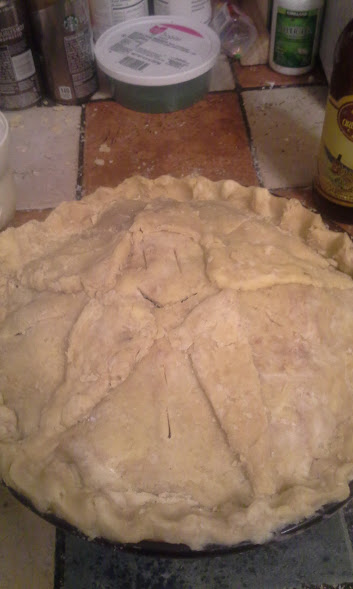 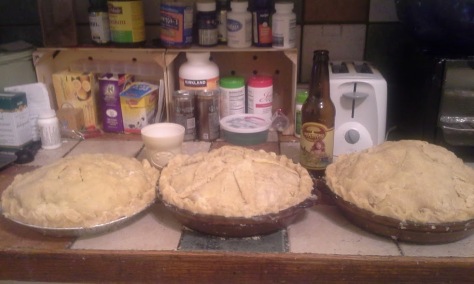 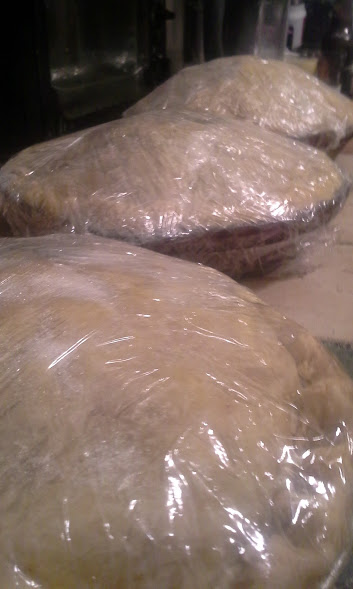 …wrapped and ready to freeze so that when the chaos of back to school is in full swing we’ll be able to enjoy a little taste of summer.